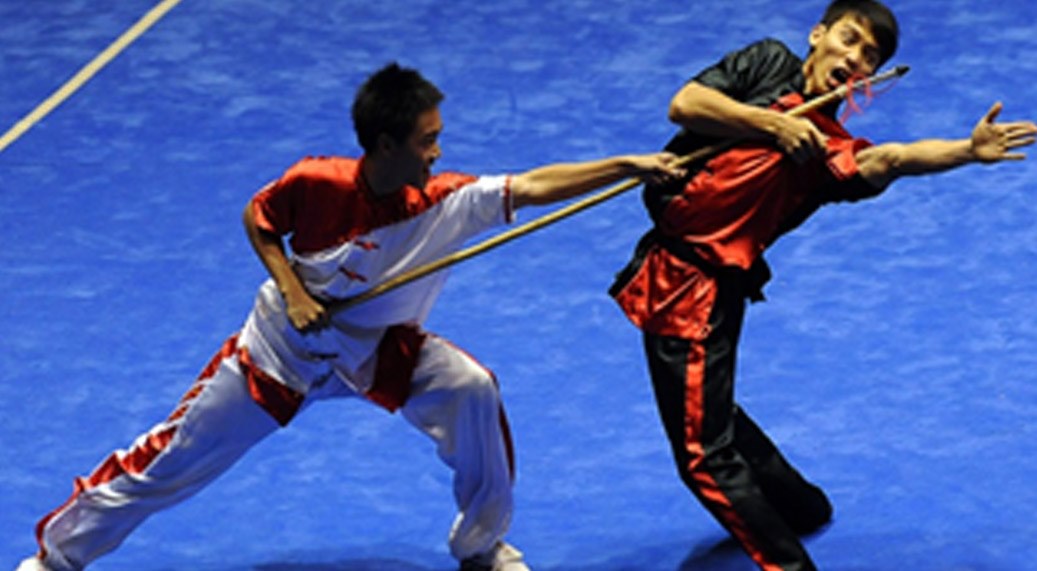 Wushu or Chinese Kungfu, is a hard and soft and complete martial art, as well as a full-contact sport. It has a long history in reference to Chinese martial arts. It was developed in 1949 in an effort to standardize the practice of traditional Chinese martial arts, yet attempts to structure the various decentralized martial arts traditions date back earlier, when the Central Guoshu Institute was established at Nanking in 1928. "Wushu" is the Chinese term for "martial arts" (武 "Wu" = military or martial, 術 "Shu" = art). In contemporary times, Wushu has become an international sport through the International Wushu Federation (IWUF), which holds the World Wushu Championships every two years; the first World Championships were held in 1991 in Beijing. The World Kungfu Championships are held every four years subset International Wushu Federation, as well. Competitive Wushu is composed of two disciplines: taolu and sanda But it has other disciplines, like self defense, breaking hard objects, and other related practices, that are not performed in competitions.

Taolu involves martial art patterns, acrobatic movements and techniques for which competitors are judged and given points according to specific rules. The forms comprise basic movements (stances, kicks, punches, balances, jumps, sweeps, and throws) based on aggregate categories of traditional Chinese martial art styles, and can be changed for competitions to highlight one's strengths. Competitive forms have time limits that can range from 1 minute, 20 seconds for some external styles, to over five minutes for internal styles. Sanda (sometimes called sanshou) is a modern fighting method and a full contact sport. Sanda contains boxing, kicks (kickboxing), and wrestling. It has all the combat aspects of wushu. Sanda appears much like kickboxing, boxing or Muay Thai, but includes many more grappling techniques. Sanda fighting competitions are often held alongside taolu.

Fax No. of the Federation / Association