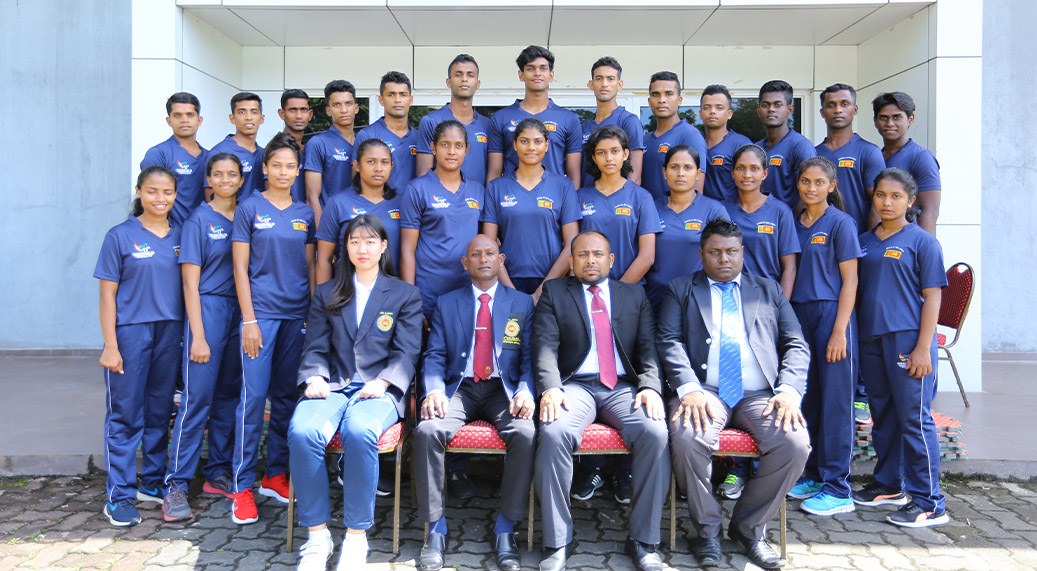 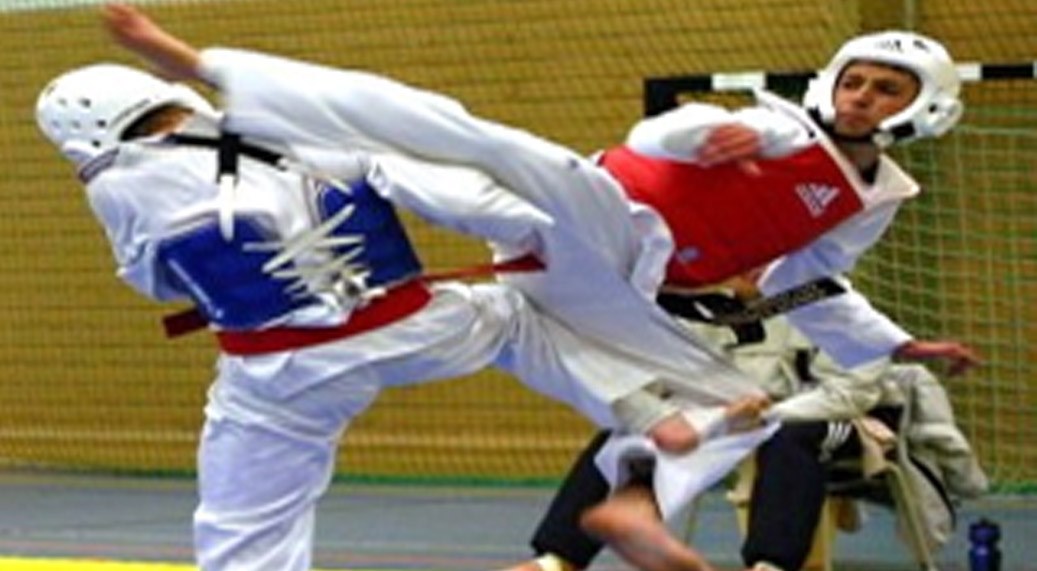 Taekwondo is a combative sport and was developed during the 1940s and 1950s by Korean martial artists with experience in martial arts such as karate, Chinese martial arts, and indigenous Korean martial arts traditions such as Taekkyon, Subak, and Gwonbeop. The oldest governing body for Taekwondo is the Korea Taekwondo Association (KTA), formed in 1959 through a collaborative effort by representatives from the nine original kwans, or martial arts schools, in Korea. The main international organisational bodies for Taekwondo today are the International Taekwon-Do Federation (ITF), founded by Choi Hong Hi in 1966, and the partnership of the Kukkiwon and World Taekwondo (WT, formerly WTF), founded in 1972 and 1973 respectively by the Korea Taekwondo Association. Gyeorugi ([kjʌɾuɡi]), a type of full-contact sparring, has been an Olympic event since 2000. The governing body for Taekwondo in the Olympics and Paralympics is World Taekwondo.

Taekwondo or Tae Kwon Do is a Korean martial art, characterized by its emphasis on head-height kicks, jumping and spinning kicks, and fast kicking techniques.

Taekwondo is one of the most systematic and scientific Korean traditional martial arts, that teaches more than physical fighting skills. It is a discipline that shows ways of enhancing our spirit and life through training our body and mind. Today, it has become a global sport that has gained an international reputation, and stands among the official games in the Olympics.

Let's take a closer look at the meaning of the word "Tae" "Kwon" "Do." It is composed of three parts as shown in the English spelling, though it is one word in Korean. "Tae" means "foot," "leg," or "to step on"; "Kwon" means "fist," or "fight"; and "Do" means the "way" or "discipline." If we put these three parts together, we can see two important concepts behind"TaeKwonDo".

First, Taekwondo is the right way of using Tae and Kwon 'fists and feet,' or all the parts of the body that are represented by fists and feet. Second, it is a way to control or calm down fights and keep the peace. This concept comes from the meaning of Tae Kwon 'to put fists under control' [or 'to step on fists']. Thus Taekwondo means "the right way of using all parts of the body to stop fights and help to build a better and more peaceful world."

One of the earliest clues of Taekwondo’s existence is a mural painted on the wall of a tomb that was built in the Korean kingdom of Koguryo, between 37 BC and 66 AD. The drawing shows two unarmed figures facing each other in a Taekwondo style stance. Additional drawings in the tomb show figures performing blocks and wearing uniforms similar to those used in modern day Taekwondo training.

The advancement of Taekwondo and its techniques developed as the country of Korea developed. There are examples and history of Taekwondo training in virtually all the records of the different kingdoms that existed within the country throughout the centuries.

The highest form of the ancient art was achieved in the kingdom of Silla. This tiny kingdom constantly faced attacks and opposition from larger and stronger areas. As a result the ruler of the kingdom, King Jin Heung, established an elite group of warriors called the “Hwarang” or “Flower of Youth”.

The Hwarang consisted of the sons of nobles within the kingdom. They were carefully selected and formally trained in all aspects of military skills including unarmed combat, which at the time was known as Tae Kyon. It is significant that the Hwarang were taught not only the importance of developing their bodies, but their minds and spirits as well. In addition to fighting techniques, the young warriors were instructed in history, poetry, and philosophy. The entire body of study was known as Hwarang Do. The Hwarang gained skills not only for battle, but for daily life. This relates directly to modern Taekwondo training, which provides self-defense skills as well as improved character, self-discipline, and confidence that can be applied to any task.

There are various Taekwondo administration bodies but it is the latter that is the best known as if the WT form of Taekwondo that has been a major part of the Olympic Games since 1988.

In Taekwondo competition, the object is to land kicks and punches upon the scoring zones of your opponent. These are the the torso and the head and both kicks and punches must be accurate and powerful, as light tapping kicks are not counted by scorers (or electronic scoring systems in major competitions). At the end of the three rounds of the match, the player with the most points is declared the winner, but the match can end early by one player knocking the other player out.

All Taekwondo practitioners, whether competitors or not are at all times expected to uphold the five tenets of Taekwondo. These are courtesy, integrity, perseverance, self-control and indomitable spirit.

The same basic principles from SooBak and Won Kang’s teachings are the foundation of modern taekwondo. As the name implies, taekwondo focuses on hand and foot techniques centered around kicking, punching or striking, and blocking. However, the taekwondo philosophy also embraces principles such as integrity, respect, and self-control.

While each taekwondo school may vary slightly on curriculum, students generally learn the following techniques:

·       Sparring. Sparring is where those basic techniques are used against an opponent. Sparring is also the competitive sport aspect of taekwondo.

·       Poomsae. This is a “form,” or series of movements that is performed to help students learn the basic techniques associated with their particular level of knowledge.

·       Breaking. Boards can be broken with a wide range of kicking and striking techniques. This is done to demonstrate power and skill.

A student new to martial arts begins as a white belt. The white symbolizes being without knowledge. As a student learns and improves techniques, he or she moves up in belt rank (symbolized by different colors) through the process of testing. Readiness for testing is determined by the instructor but generally a diligent taekwondo student can test once every two months.

In Taekwondo competition, fighters compete against other fighters of the same sex. They are also placed into weight categories to ensure that fights are as evenly matched as possible. In junior competitions, there may also be age categories too.

The white taekwondo uniform that competitors wear is often called a gi, but technically that is the Japanese name for a martial arts uniform and the proper Korean term is a dobok. A coloured belt is tied round the middle of the dobok and the colour signifies the grade of the practitioner. The belt system goes from white for beginners through to yellow, green, blue, red and then black for more experienced practitioners. Black belts then receive their ‘dan’ grades as they progress further in their experience and expertise. In a Taekwondo match, each competitor wears several pieces of protective equipment and these are:

-Trunk: The blue or red colored area of the trunk protector

-Head: The entire head above the bottom line of the head protector

Criteria for valid point(s): Point(s) shall be awarded when a permitted technique is delivered to the scoring areas of the trunk with a proper level of impact.

Point(s) shall be awarded when a permitted technique is delivered to the scoring areas of the head.

The determination of the validity of the technique, level of impact, and/or valid contact to the scoring area shall be made by the electronic scoring system except fist techniques. These PSS determinations shall not be subject to Instant Video Replay.

The WT Technical Committee shall determine the required level of impact and sensitivity of the PSS(electronic scoring systems), using different scales in consideration of weight category, gender, and age groups.

In certain circumstances as deemed necessary the Technical Delegate may recalibrate the valid level of impact.

-One (1) point for a valid punch to the trunk protector

-Two (2) points for a valid kick to the trunk protector

-Three (3) points for a valid kick to the head

-Five (5) points for a valid turning kick to the head

u  Match score shall be the sum of points of the three rounds.

Invalidation of point(s): When a contestant records points following prohibited act(s):  If prohibited act is followed by point(s), the referee shall declare the penalty for the prohibited act and invalidate of the point(s).

·       Taekwondo matches should be contested by competitors of the same sex and in the same classified weight category.

·       The competition area is a mat that measures 8 meters squared.

·       Taekwondo matches are contested over 3 x 2 minute rounds with a rest of 1 minute between rounds.

·       Each fighter attempts to knockout their opponent or score points by landing blows on their opponent’s trunk or head. Kicks are allowed to both to the trunk and head, whilst punches are only allowed to the body. Below the waist is not a permitted target.

·       If a fighter and their coach think that a point has been missed or that a mistake has been made, they can make a protest by WT rule and regulation. A video replay is then looked at by Video jury and a decision is made.

- Avoiding or delaying the match

- Grabbing or pushing the opponent

- Lifting the leg to block, or/and kicking the opponent’s leg to impede the opponent’s kicking attack, or lifting a leg or kicking in the air for more than 3 seconds to impede opponent’s potential attacking movements, or kick was aiming to below the waist

- Kicking below the waist

- Attacking the opponent after "Kal-yeo"

- Hitting the opponent’s head with the hand

- Butting or attacking with the knee

- Following Misconducts of contestant or coach

a) Not complying with the referee’s command or decision b) Inappropriate protesting behavior to officials’ decisions c) Inappropriate attempts to disturb or influence the outcome of the match d) Provoking or insulting the opposing contestant or coach e) Unaccredited team doctors, physiotherapists, athlete trainer, or chiropractor, or other team officials found to be seated in the doctor’s position f) Any other severe misconduct or unsportsmanlike conduct from a contestant or coach.

Contestants may compete up to two (2) categories of competition unless he or she is limited by gender or age.

2.4 Mixed Team (Composition of 5 members including more than 2 males and 2 females)

3.6 Mixed Team (Composition of 5 members including more than 2 males and 2 females)

1 Free Style Poomsae is the performance based on taekwondo techniques with composition of music and choreography.

2.1 Yeon-mu line shall choice of contestant

2.2 Music & choreography shall be choice of contestant.

2.3 Performed techniques must be within boundary of taekwondo. The definition of taekwondo techniques shall be determined by WT Poomsae Committee, when contestant submits performance plan of free style poomsae.

1 Duration of Contest by Division

1.1 Recognized Poomsae: Individual, Pair, and Team competitions up to 90 seconds

1.3 The waiting period between 1st poomsae and 2nd poomsae is a minimum of 30 seconds.